The Atlantic Sessions at Flowerfield

Flowerfield Arts Centre are delighted to host some of the great acts and events at the 2019 Atlantic Sessions Festival starting with Sam Henry - Songs of the People a 2018 documentary made for both BBC Northern Ireland and TG4 which explores the unique story of Coleraine man Sam Henry and his remarkable collection of over 800 songs gathered from across the North Coast and beyond. There will be a Q and A with the producers and a performance of some of Sam' work as well. This is a free event, but booking is advised. 7pm Thursday 14th November

Amanda St John is a soulful singer-songwriter from Glenariffe, Co. Antrim. She received rave reviews and worldwide airplay of her debut album 'Grow', which was released in 2016. With comparisons to Dusty Springfield and Imelda May, St John has been described as a ‘head-turning vocalist with serious song writing prowess… a sensational artist’ [Visit Dublin]. Amanda will launch her new album to the North Coast audience on the night, which was inspired by her recordings at the legendary FAME Studios, Muscle Shoals, Alabama. Support on the night will be from Tony Villiers. 9pm Thursday 14th November

Buy Tickets for the Atlantic Sessions 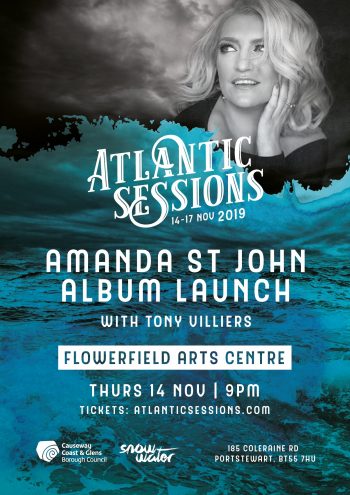